Established in June 1998 this site has taken 23 years to build and has seen MULTI MILLIONS of visitors.
If you haven’t been here before, get set to discover one of the most comprehensive Pink Floyd sites on the internet!

Originally founded by Col Turner (Who ran this site for 19 years.) In 2017 it was handed over to Site Director Liam Creedon, who was later joined by Sean Pincombe in 2019 and who is now our Contributing Editor.

We do not receive any funding at all, so donations are most welcome. It does cost money to keep this site going, so even if you donate just $5 it can make a difference. (Please use the Donation button in the left hand column.) Thank You!

As a convenience to you we are providing these Amazon Links USA | UK | CANADA We are a participant in the Amazon Services LLC Associates Program, an affiliate advertising program designed to provide a means for us to earn fees by linking to Amazon.com and affiliated sites.

Presented by Spandau Ballet’s Gary Kemp, who wrote and performed megahits like ‘Gold’ and ‘True’, and Guy Pratt, a bass player who shaped songs for the likes of Madonna and Pink Floyd, you’ll hear exclusive stories of life on the road, in the studio and what really happened behind the scenes from artists who wrote, performed and produced the some of the biggest classic rock and pop tracks of all time.

Available from 16th May 2021 on Itunes, Spotify and all other Listening Platforms. Click Here to be taken to Apple Musics Listening Page 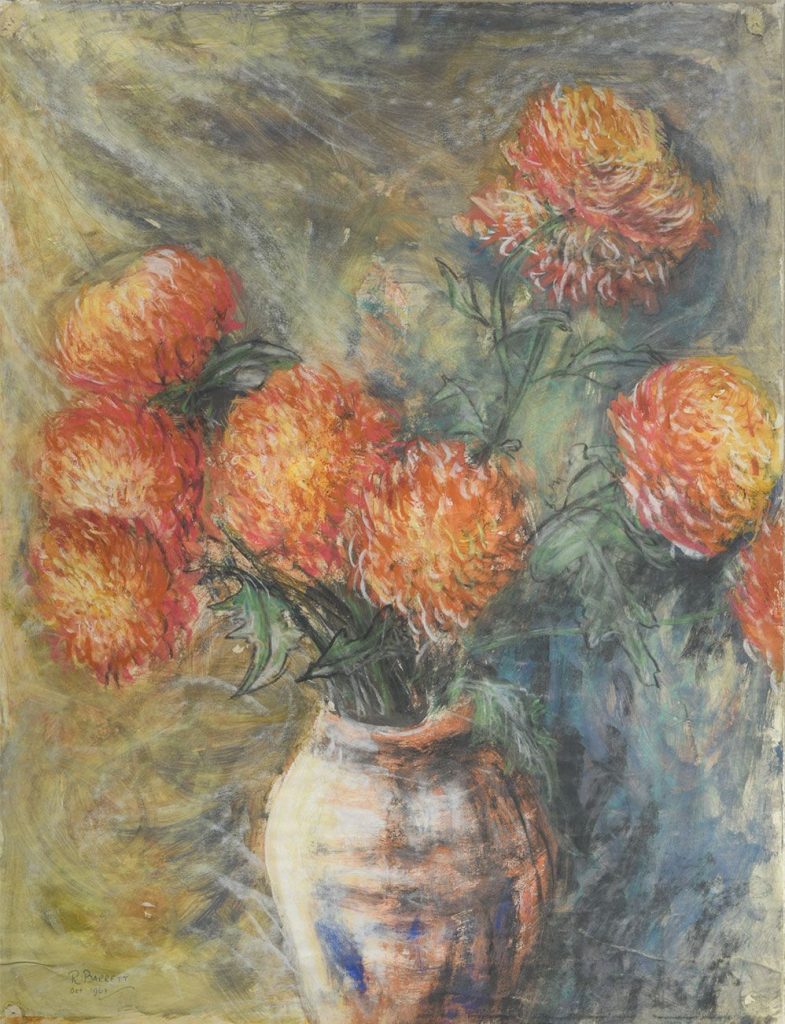 A rare school days painting by Pink Floyd co-founder Syd Barrett that he gifted to his art teacher 60 years ago will go under the hammer later this month.

The decidedly Van Gogh-esque watercolour and pastels picture is named Orange Dahlias in a Vase, and Syd Barrett created it aged 15 in October 1961 when he was a pupil at Cambridgeshire High School for Boys.

As a parting gift, Barrett personally gave the painting to art teacher Gerald Harden and signed it ‘R. Barrett. / Oct. 1961’ shortly before he went to study art at Cambridgeshire College of Arts and Technology.

Gerald Harden’s son, Philip Harden, who currently owns the painting and was a boyhood friend of Roger ‘Syd’ Barrett and Roger Waters, says: “I used to go and visit Roger on a regular basis and I even remember playing cowboys and Indians and watching the first Doctor Who shows with him and Roger Waters back in the 1960s. They both went off to art college and disappeared from my life and the next time I saw them they were Pink Floyd.

“Roger Barrett was a kind and thoughtful person, with a joyful and almost childlike wit and humour. He was a great fun person to be around in those early days and he was incredibly creative, and would often be seen painting for hours on end.

“I remember my father bringing this picture back home after Roger had given it to him, it had been put up on the wall in the classroom and my father kept it as part of his portfolio. It has something incredibly special about it and I would recognise it immediately as his style at the time, he was a very gifted artist.

“We have decided to sell it as it has been in storage for some years now and we feel it is time for someone else to enjoy it. We know that Roger Barrett became a worldwide phenomenon; he stood for so many things in different people’s minds, and we think there must be someone amongst his army of fans who could really treasure it.”

Brett Tryner, Director at Cheffins, adds: “Syd Barrett remains one of the greatest icons in the world of rock music, and while he is foremost known as the founder of Pink Floyd, he was also a talented and accomplished artist.

“Although the pictures from his later life have been well-publicised, this present lot is a window into the artwork of his earlier days, before he went on to create the band which changed the world of music throughout the sixties.

“There are few original pictures by Syd Barrett still in existence, especially as during the later years he took to finishing a painting, photographing it and then burning the canvas. The picture on offer at this sale therefore presents a rare opportunity to purchase a painting from Barrett’s early days and is bound to be of special significance for his legions of fans both in Cambridge and from further afield.”

You can find out more about the Syd Barrett auction by Clicking here. 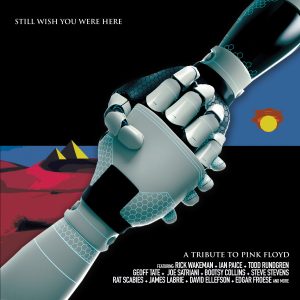 Earlier this month we shared the news that a compilation entitled Still Wish You Were Here was being released.

With a release date of May 28th, 2021 AFG Correspondent Richard Hobo has been on hand to very kindly write a review ahead of the release later this month.

STILL WISH YOU WERE HERE –VARIOUS ARTISTS
By Richard Hobo

Part of the beauty of music is that listening to a good album evokes the memories of when you first heard it and I’m happy to say that the tribute album Still Wish You Were Here, featuring a wide variety of musicians has the same ability to transport me back to the mid-seventies when the original album was first released.

Personally, I found it particularly mind-blowing that the bass lines of Roger Waters were now being played by King Crimson and Peter Gabriel bassist Tony Levin,(who also features on tribute albums for The Dark Side of the Moon and The Wall), PiL’s Jah Wobble, Megadeth’s David Ellefson and even Funkadelic’s Bootsie Collins. I don’t think anyone saw that coming. Even David Gilmour who has admitted that his “fingers were never designed to go fast” must be curious to hear just what Joe Satriani and Steve Stevens have done with his guitar parts

The album opens with Shine On You Crazy Diamond, now featuring a flute and some blazing guitar work, which sets the tone for the rest of the album. A mostly respectful rendition of a much-loved album with some additional flourishes here and there.

There are a couple of clunkers, however, the worst one being Todd Rundgren inflicting the American two-syllable pronunciation of “Jagwar” upon us on Welcome to the Machine, as opposed to the “correct” three-syllable English version of “Jag-u-ar.” I couldn’t care less about which is right or wrong in the grand scheme of things, but in a song, missing out a syllable means missing out a beat. Even Taylor Swift, who is as American as apple pies and slammin’ screen doors manages to sing Jag-u-ar in one of her songs.

Shine On You Crazy Diamond (Parts 6-9) is probably the best musical rendition of the whole album. Rod Argent, Steve Hillage, drummer Ian Paice, and bassist Bootsy Collins captures the feel of this song and, for me anyway, evoked lazy summers of my youth spent staring at the pictures on the original gatefold sleeve and wondering about where those trees were, trying to find the naked woman in the red scarf, wondering how they got the burnt corner of the front cover photograph and the sand falling out of the back cover.

This is not a note-perfect rendition of Wish You Were Here, because we’ve already got that; it’s more of an honorable tribute. Overall, it sounds like a collection of musicians gathered together in a barn grooving to one of their favorite albums. At times it made me yearn for the original and the vocals are probably the weakest performances. For instance, no one can replace Roger Waters on the vocals for Shine On You Crazy Diamond, not even David Gilmour, and the absence of female backup singers is certainly notable. King Crimson saxophonist Mel Collins plays some bang-on sax work, which is probably not surprising as he played on Roger Waters’solo albums The Pros and Cons of Hitch Hiking and Radio KAOS and their subsequent tours in the eighties, as well as Waters’ In the Flesh tour in 2000.

There are other Floyd connections, as the man who replaced Waters on bass on A Momentary Lapse of Reason, Tony Levin also features and plays a great bassline on Welcome to the Machine. I had a bit of a chuckle when I saw Megadeth bassist Dave Ellefson was involved, as any real Pink Floyd Nerdist will know, one of the names Pink Floyd was called before Syd Barrett came up with The Pink Floyd Sound was The Meggadeaths.

It’s worth noting that most of the musicians involved in this album are not far off the ages of the original Pink Floyd members and while it must be quite satisfying to have your peers pay homage to your work in such a grand and serious fashion, personally I can’t wait to see what the next generation of young musicians makes of the works of this great band.

Presented by Spandau Ballet’s Gary Kemp, who wrote and performed megahits like ‘Gold’ and ‘True’, and Guy Pratt, a bass player who shaped songs for the likes of Madonna and Pink Floyd, you’ll hear exclusive stories of life on the road, in the studio and what really happened behind the scenes from artists who wrote, performed and produced the some of the biggest classic rock and pop tracks of all time.

Available from 10th May 2021 on Itunes, Spotify and all other Listening Platforms. Click Here to be taken to Apple Musics Listening Page

Those of you who tuned in over the last 16 months for the UK Lockdown as part of the Covid 19 pandemic will be aware of the live streams David Gilmour and Polly Samson along with the rest of their family did over Facebook.

As many of the live streams featured performances and story telling, These have now been included on the Official David Gilmour YouTube Channel.